The Crocodile Trophy was founded by ex-Tour de France racer Gerhard Schönbacher and this week he launched his 25-year Anniversary edition together with multiple Croc Trophy racer and ultra-endurance athlete Wolfgang Fasching in their home country of Austria in Europe. The two old-hands were accompanied by the Austrian National Marathon Champion Angelika Tazreiter, who will be competing in her first Croc Trophy as one of the female favourites for the overall victory this year. The Australian line-up will include Master amateur racer Martin Wisata from the Central Coast who will compete in his 10th consecutive Crocodile Trophy this year, the current record world-wide. At the start also will be former “Best Australian” Daniel Beresford from Wagga Wagga in NSW, an Australian artist at heart who created this year’s trophies for the overall male and female victories.

On a beautiful Austrian early autumn day, the Europe-based core Crocodile Trophy organisational team invited leading news and cycling media to a press conference at the “House of the Sea” (“Haus des Meeres”), a public aquarium in the heart of Vienna. Under the watchful eyes of the “locals” living in the “Krokipark” reptile section of the aquarium, this year’s eight day stage plan from Cairns to Port Douglas in Tropical North Queensland was introduced. 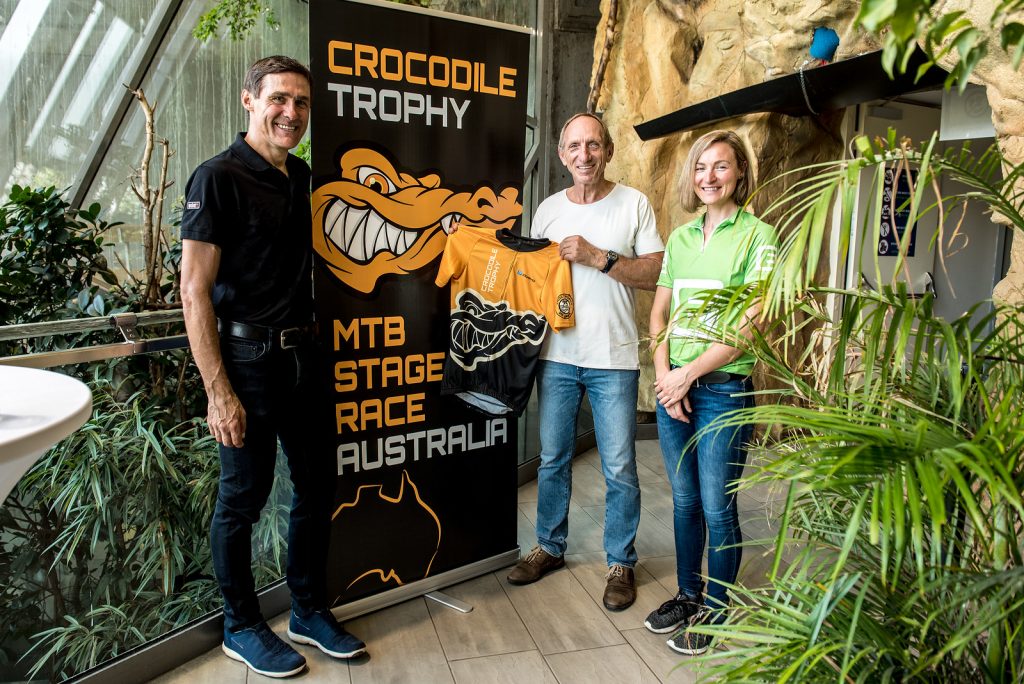 “This is truly a great adventure on your mountain bike. The race has changed a lot over the last 25 years. Whilst in its early days it included stages up to 200 kilometers a day, these days it has established itself as a major mountain bike stage race on the international circuit with singletrails and this year only two stages are longer than 100 kilometers”, explained the ultra-endurance athlete Wolfgang Fasching. The Austrian, who only a month ago raced across Europe from Gibraltar all the way to the North Cape on his road bike, participated in the Crocodile Trophy twice. “The long stages played very much in my favour when I raced the Croc, however, also today one can’t underestimate the event. The participants will be pushed to their absolute physical and mental limits, especially the majority of the peloton, which are amateur racers”, the mental coach and three-time winner of the Race Across America (RAAM) added.

“Originally I had planned to put together a stage race through Vietnam from Hanoi to Saigon. However, it didn’t work out and because I had raced for an Australian team in Melbourne during my professional career I still had a lot of contacts in the cycling industry all those years ago”, explained Schönbacher who raced in the Tour de France multiple times. Towards the end of his career he had followed the rise of the mountain biking scene very closely and curiously and realised that there hadn’t been any multi-day events in that sport at the time.

“In the early years we raced from Darwin to Cairns, more than 20 stages. My team and I have experienced quite a few adventures ourselves throughout the years delivering this event, which is a huge logistical and operational challenge. However, we have adapted to the tough Australian conditions and surrounds”, the Austrian reminisced, who has regularly has attracted top international mountain bike stars to the event in Australia. Those well-known athletes included cyclists like the five-time RAAM winner Jure Robic from Slovenia as well as Paric-Roubaix winner Eric Vanderaerden as well as the double Time Trial World Champoin Annemiek Van Vleuten.

“I’m looking forward to my inaugural Crocodile Trophy. However, it will be quite an experience to see how I will cope with the heat”, said Angelika Tazreiter of her first race Down Under. The Austrian National Marathon Champion doesn’t have a lot of experience racing in Tropical North Queensland, however, is still considered one of the absolute favourites for the female overall victory this year. “Here at home I know the mountains, the hills, the forest trails… I’m literally racing into the unknown”, she said.

The Austrian-born Martin Wisata has lived in Australia for more than 15 years and this year will be his 10th Crocodile Trophy participation, which is the current record of consecutive Croc events in the world. “It has definitely become a sort of addiction for me”, admits the 42-year old race ambassador. “This race is one of my big annual racing goal – I race in the amateur league, however, still, all my racing and riding throughout the year have been geared towards the end of October for almost a decade now – it has been an incredible journey from crawling across the finish line in the first year to now racing for category positions”, says the serial finisher with almost 7,700 “Croc-kilometers” under his belt.

Daniel Beresford agrees that racing the iconic event has been a life-changing experience, which inspired him to create the overall winner’s trophies for the 25th Anniversary edition, “I really love the race and it has changed my life since I did my first Croc in 2016! Everyone does this race with different goals and passions in mind and I really found myself in that race, from being stripped bare physically and mentally!” He added that he had wanted to create pieces of artwork that would remind the riders of what they have achieved and experiences that were immortalised onto canvas.

For a quarter of a century the Crocodile Trophy has challenged racers from all over the World to compete in an ultra-endurance mountain bike race, which also offers an incredibly authentic eight-day Australian adventure.

The race stages offer the biggest variety of mountain bike trails and racing in a multi-cultural peloton with cyclists from all over the World and Australia and this year the event will feature two brand-new stage destinations. This year’s Crocodile Trophy racers are in for the ultimate of MTB stage race experiences from the rainforests in Cairns via singletrails and the Aussie bush into the Outback. The first brand-new stage destination will be the Ringers Rest Functions Venue surrounded by beautiful bush land on the Atherton Tablelands. Then the peloton will head into the iconic Aussie Outback around Mareeba and on to the tropical Skybury Coffee Farm. A highlight will be the night spent at Hartley’s Crocodile Adventures and the Port Douglas beach arrival is a treat.

The 2019 racers will be able to immerse themselves into the authentic Australian camp life or book the daily transfers to partner hotels in the region. The new “Croc Elements” supporting event invites riders to experience the true essence of the “big Croc” as it shows of all the elements that make up this legendary event on its final three days: these participants can fly into Cairns mid-week and with shuttle services and hotel packages offered, they will be transferred to meet the peloton at Skybury Coffee for a marathon circuit on day six, then race to Hartley’s Croodile Adventures and finish with everyone on Four Mile Beach.

No doubt the Crocodile Trophy is one of the toughest MTB stage races in the World, but for a determined mountain biker it is an incredible experience and the opportunity to create memories and friends for a lifetime.

ORDER THE ANNIVERSARY JERSEY FROM OWAYO