The Crocodile Trophy is a loooong race, eight days through the beauty and the roughness of Tropical North Queensland. From the rainforests into the bush and the remote Outback and back to the coast. It’s a tough one and wouldn’t be possible with our wonderful crew and their Team Leaders!

We’ve had a chat to them to find out some more “Croc Fun Facts” for you guys!

Johannes Schadler is an Austrian Chef, living and working in Sydney and once a year he takes a holiday… to cook at the Crocodile Trophy. This man has had training in one of the top restaurants in Austria and he says he enjoys the challenges of cooking in the Outback with a multi-lingual and multi-cultural crew. The Croc goes through a massive amount of food, here are some stats for your amusement:

Each day we cook and eat:

Read the full chat in the “Chef Blog” here 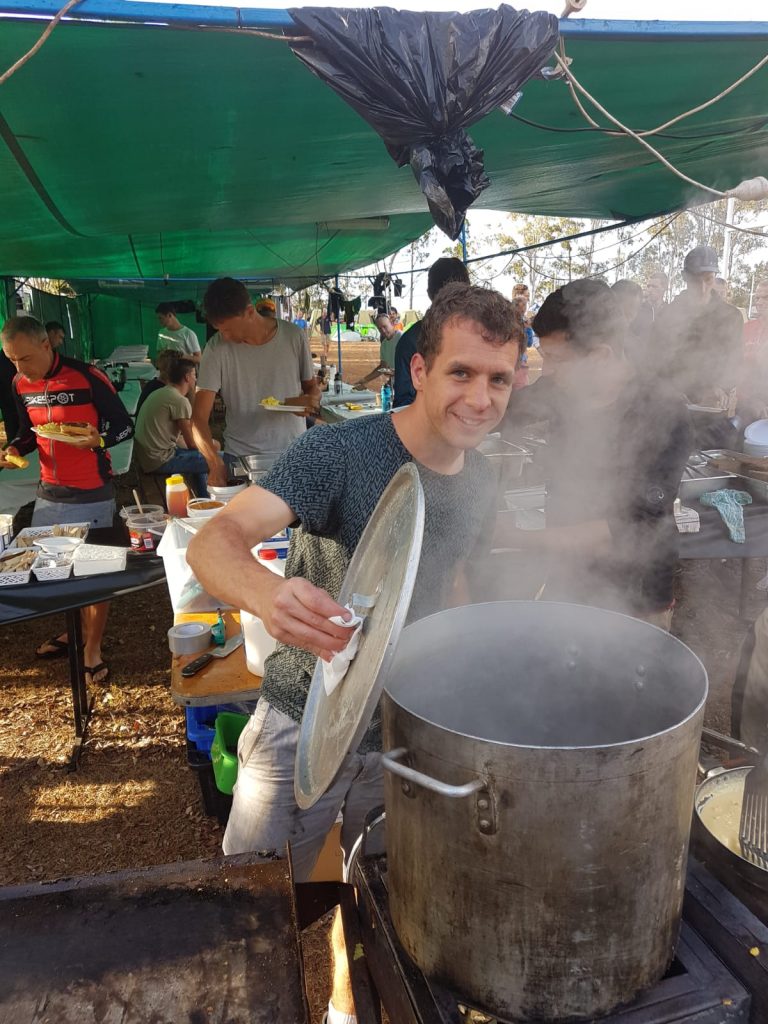 Tim has been working for the Crocodile Trophy… it seems like forever, he has become an integral part of our crew! He manages the feed zones, one of the most important jobs in the camp. It’s to make sure that the feed zones are in the right place, are always stocked up with water, electrolytes and food for the next day. Each morning him and his teams roll out onto the race track, navigating through rough terrain and finding their way around remote Outback Australia, so that they can offer a smile and encouragement to our riders as they come through.

CROC: Talk us through your supplies!

Tim: We’re lucky, the weather has been pretty cool, so we usually only go through about 50 litres of water per truck and there’s three trucks. Remember, we have bottle drops as well so, this is just the water that the riders fill up in addition to those. We also use about 3 tubs of electrolytes per depot per day.

CROC: What about the food

Tim: We go through about 3 watermelons, 8 pineapples and 50 bananas each day per depot. We usually use 3-4 boxes of muesli bars per depot each day.

…. so we did the math 8 stages and 22 feedzones/depots all up, that is according to Tim’s stats: 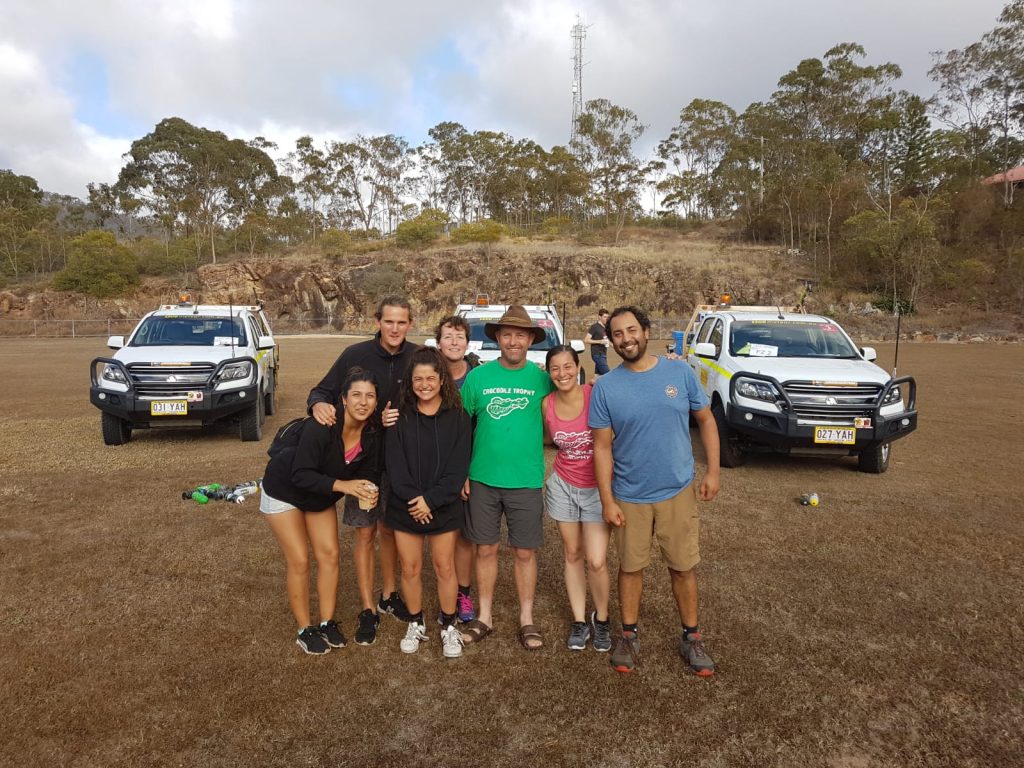 Silke is at the Crocodile Trophy for the fourth time and has been supporting our sister race, the Alpentour Trophy in Austria as well. She is a very experienced sports physician and has learned to deal with and be prepared for the Aussie Outback conditions well.

CROC: Silke, Good Morning! Tell me about your most common ailments of our Croc racers so far.

Silke:  Well, I’ve been feeling really well so far (you do need that sense of humour out there!).

Silke: Otherwise, we’ve had very common and mostly minor issues so far, luckily, grazes predominantly. We did have an elbow injury and I’m afraid that the synovial bursa has ruptured. We are monitoring the injury and I am redressing the wound daily, however, the rider will not race today. Then we’ve looked after two dehydrated riders. One was in a pretty rough place, but we are set up for it and can look after them with intravenous drips. I’ve seen the one rider have breakfast this morning, so he’s much better today. But I’m happy, day three and no major emergencies as yet.

CROC: Thanks, we hope you’ll have a very quiet day today out there! 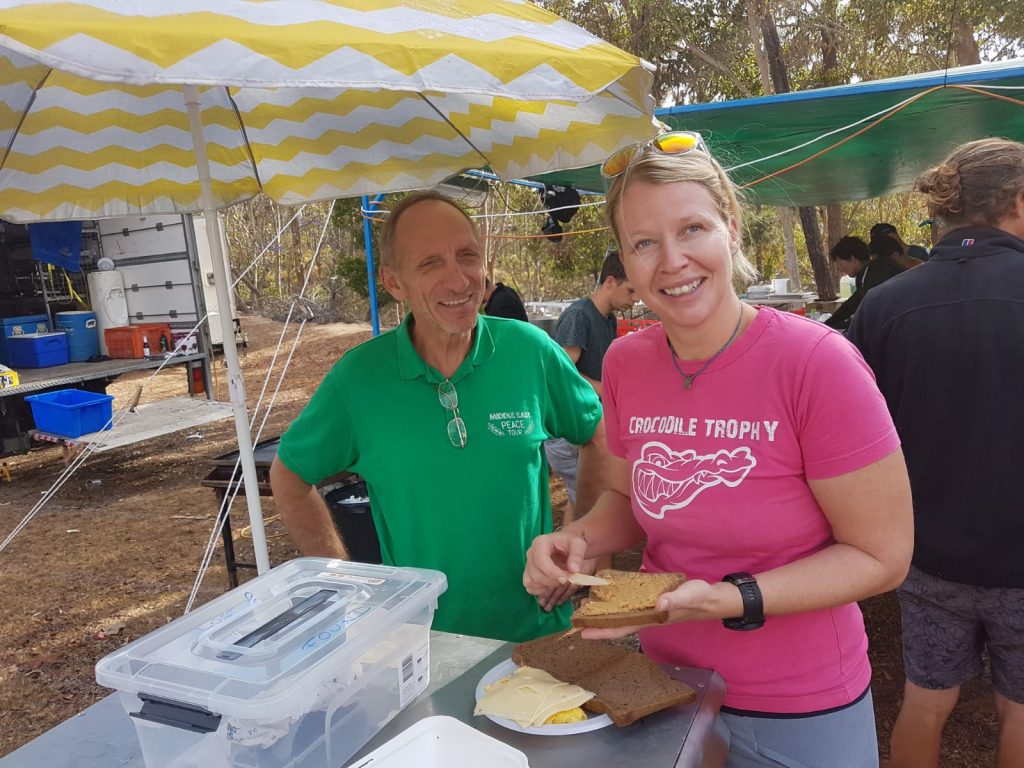 Silke Kranz at breakfast – ‘coffee briefing’ with our founder.

Micha Salden is one of the staples in the Croc camp, travelling with the race since 1999. This guy has seen a lot of broken bikes and could write about  a book about the evolution of carbon in the bike industry. Him and his assistant are providing tech support at the Croc, MacGuyver-style.

CROC: How many bikes to you guys repair each day?

Micha: The first stage was an easy one with only a dozen or 15 bikes, but after the second stage… woah, we were busy! We had 27 bikes to look after.

CROC: What are the most common issues you have to address?

CROC: Any major mechanicals so far?

Micha: No, not yet, a bottom bracket ball bearing was fun to fix, but it’s only day two, they will come. We haven’t destroyed any bikes yet.

CROC: Can you hear the carbon crack already?

Micha: (laughs) Those days are over, man, carbon wheels were the major victims up until just a few years ago. We had a 100% strike rate then, like 10 years ago. But not anymore. You really have to hand it to the bike industry, they’ve done well, making today’s carbon strong enough to withstand a race like the Croc! These days, if an aluminium wheel gets hit hard it has a dent. But if you hit a carbon wheel so hard that it actually breaks, an aluminium wheel would long be gone before that! 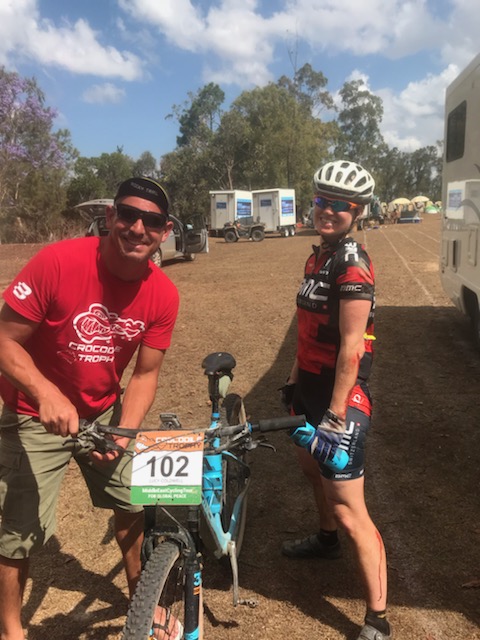 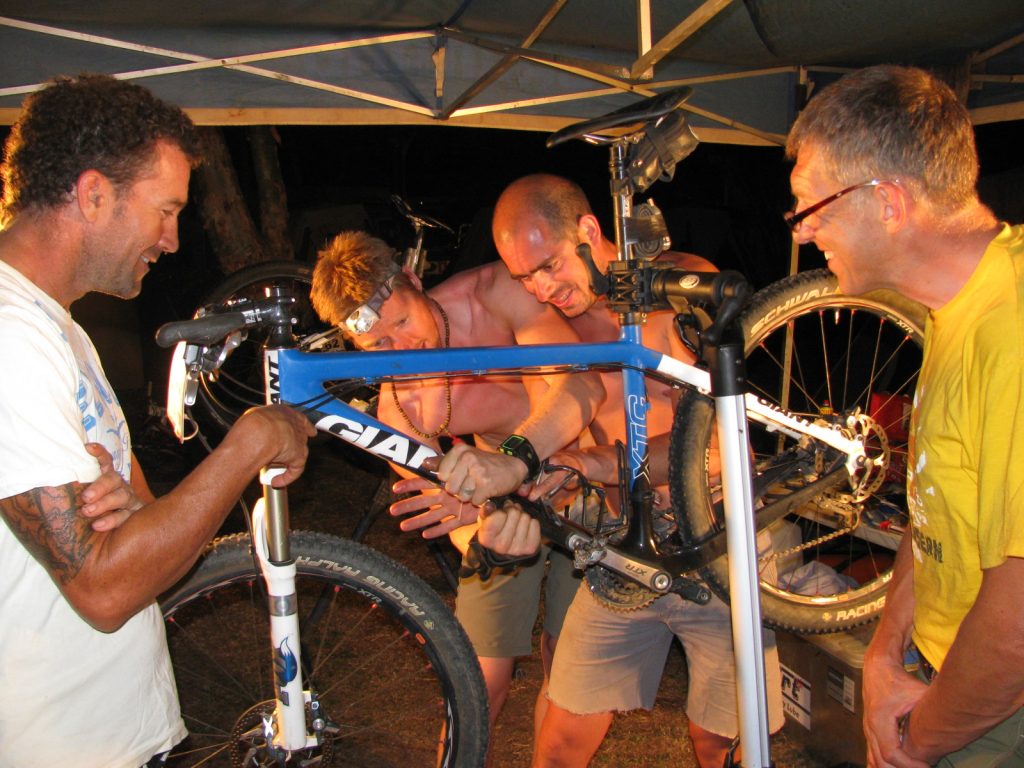 Croc archive photo from way back then: fixing a carbon frame in the Outback.

Juliane has been on board with the crew since 2011 officially and has traveled with the event up until 2014 with her and Martin’s little son arriving the year after. Since then she has been supporting the event remotely and has also helped out at the Alpentour Trophy in Austria each year. For her and husband Martin, the Crocodile Trophy is the highlight of the travels and adventures every year – since 2003 the two Austrians have been living in Australia and have organised MTB events in and around Sydney and Canberra for the last 10 years.

Juliane can’t wait to hopefully come back and personally accompany the race for the 25th Anniversary edition in 2019… the Croc with a toddler?!? Now there’s a challenge!

Read an interview with Juliane about the Crocodile Trophy here 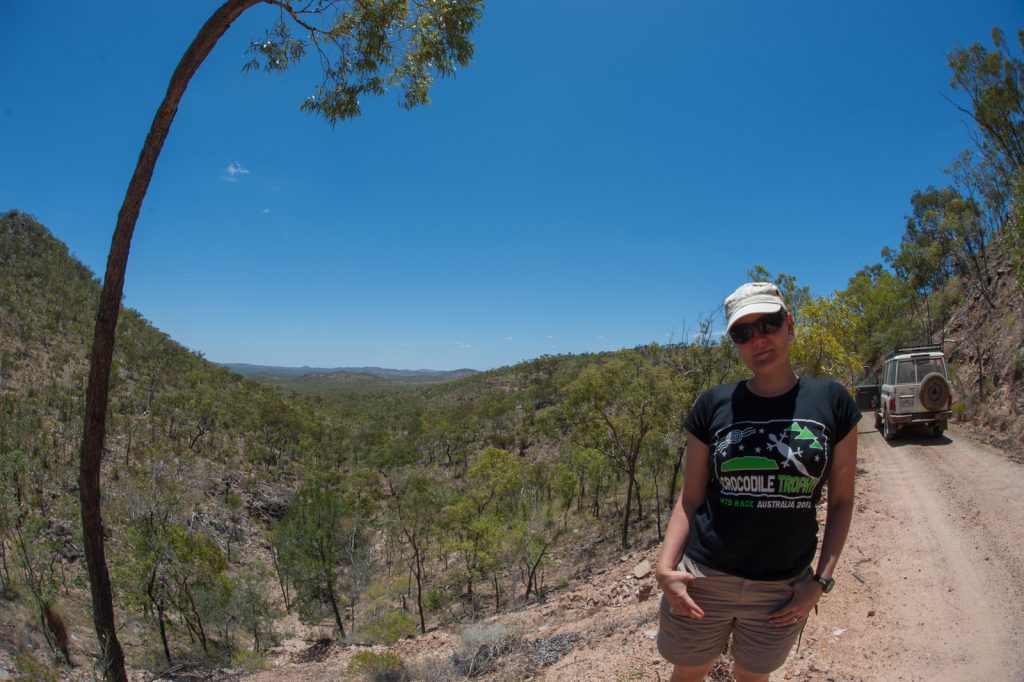 Thanks, guys for tackling the Croc with and for us! 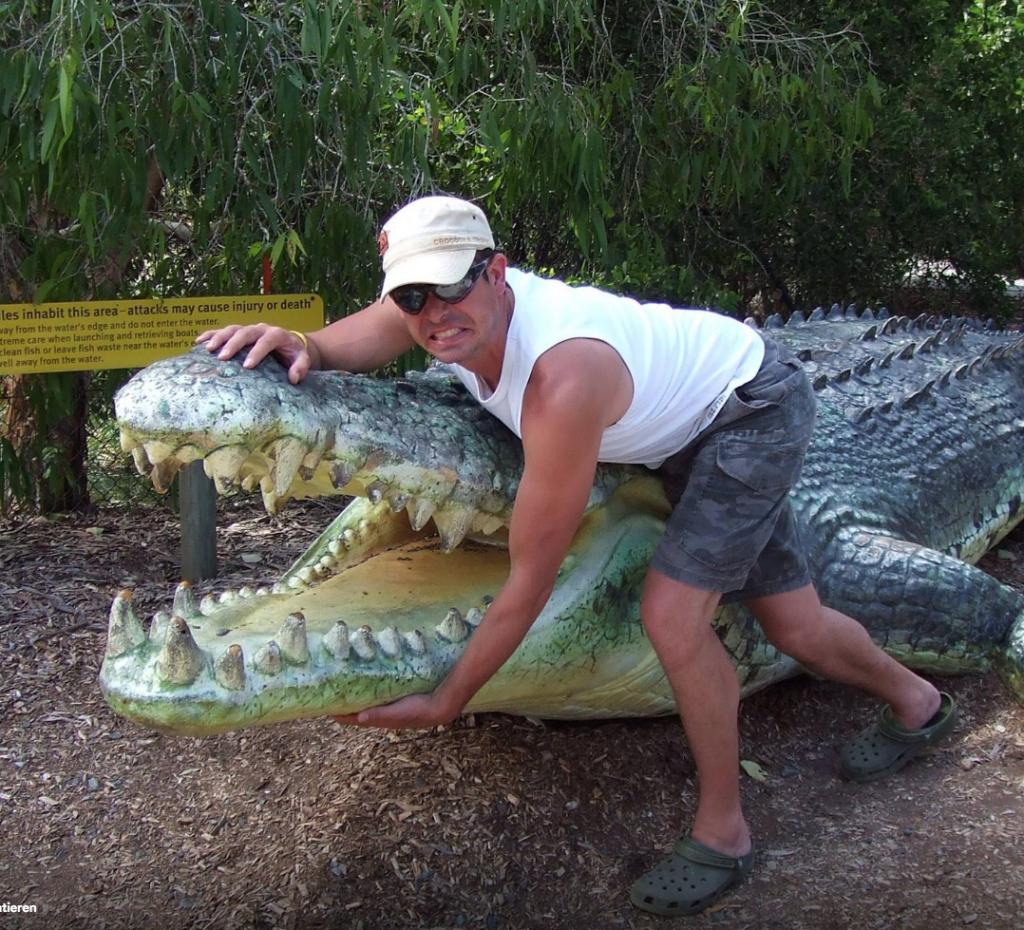