The Crocodile Trophy is one of the toughest and definitely the most legendary MTB stage race in the World and it starts on Saturday, 13 October in Cairns. The multicultural peloton with 16 different nationalities is about to embark onto the most diverse stage plan of any race of its kind in the world – eight days through Tropical North Queensland. Rainforests. Bushtrails. Outback. And the finish on Four Mile Beach in Port Douglas. The multiple Swiss National Champion and four-time Crocodile Trophy winner Urs Huber is at the start trying to claim a record-breaking fifth victory. Today he mingled with some of his fellow racers and elite opponents at the Cairns Aquarium.

For almost a quarter of a century it has challenged racers from all over the World to compete in an ultra-endurance mountain bike race, which also offers an incredibly authentic eight-day Australian adventure. Being endorsed by the International Cycling Federation UCI (Union Cycliste Internationale) the Crocodile Trophy offers a high international S2 status for elite mountain bikers, who are able to collect valuable international ranking points as well as prize money. For amateur racers from all over the world and Australia the iconic event is an incredible endurance challenge that immerses them into the unique landscapes of Tropical North Queensland.

Huber on a mission to claim record-breaking fifth Croc win

Urs Huber is one of the most accomplished Crocodile Trophy racers of all time – five starts, four victories so far. In 2018 the 33-year old returns for his sixth Crocodile Trophy and says to claim his fifth title is the “clear goal” as it would put him into the record books as the competitor with the most Croc wins of all time in the 24-year history of the race.

Huber says he is very determined to win and his experience will be a big advantage, “You must not make any mistakes throughout the eight days, neither on nor off the track. Because I will be travelling alone again I will be very busy to maintain the bike and equipment after each race day. But that is all part of the Croc and it is what makes it so unique and special. By now I should be experienced enough to manage it well.”

Urs will be challenged by some of the top European endurance racers including Luxemburg National Champion Søren Nissen, the runner-up at the Crocodile Trophy in 2015 and said that he will try to apply everything he’s learned from the first participation this year to win, “In 2015 I finished in second behind Urs Huber. Back then, there was not that much I could do, he was just stronger. I hope I can come back and really fight for the overall victory.” About this year’s stage plan he said, “You will need to stay focused for each stage, because every day is going to be a challenge.”

Another strong contender is Austria’s Matthias Grick who has two top-10 Croc finisher positions under his belt. He will be racing for the ‘Best Austrian’ leader jersey and has his eye on the top podium step as well.

In the women’s, the Cairns-local Sarah White will be a major female elite contender. White won the Croc before and is back for another shot at it. With Lucy Coldwell she will have a strong opponent with an ex-elite road cyclist who represented Scotland in the 2014 Commonwealth Games.

With two new General Managers at the helm of the event, the 2018 stage plan has been completely revamped. Both Regina Stanger and Koenraad Vanschoren are former Crocodile Trophy finishers and experienced stage race event managers in Europe. For two weeks they have scouted the Tropical North Queensland region and this year’s tour is versatile and will include many of the most popular elements from previous years and said the goal was to retain the essence of the race whilst showcasing some of the hidden gems the region has to offer.

With start this Saturday in Cairns, the race will head for the Atherton Tablelands and Lake Tinaroo and in a first, the Crocodile Trophy will put up camp in Herberton for two nights. It will then travel via remote mining trails via Irvinebank towards the tropical Skybury Coffee Plantation and via the historic Wetherby Station towards the finishing town of Port Douglas. For the first time the official timed finish will be at the bottom of the infamous Bump Track just outside of town and the entire peloton will ride across the finish line on Four Mile Beach together on day eight.

The Crocodile Trophy founder and owner, Gerhard Schönbacher, is content with the direction his race is taking. “This year I am really looking forward to travelling with my race. Regina and Koenraad have been doing a great job getting operations and logistics into place and I know the event and our participants are in experienced hands”, he said of his new team. As such he has been able to work on his newest event and non-profit organisation, the Middle East Tour (MET), a seven-day road cycling event and the first cross-border sport event for peace in the world, which will take place in March 2019. Starting in the City of Amman its stage destinations will include Petra, the Dead Sea, Red Sea, Aqaba, Eilat, Ramon Crater and the final stage will take participants from Jericho to Jerusalem.

The Middle East Tour is one of the major supporters of the Crocodile Trophy and together with the Austrian Alpentour Trophy sister event, which is managed by Stanger, as well as Vanschoren’s Belgian Mountain Bike Challenge now forms a powerful stage racing network.

Says Schönbacher, “We are really happy that all participating authorities in the Middle East are behind our MET idea, seek to make this project work and give us all the support possible.” He added that he was also very thankful for the local support the Crocodile Trophy is getting as part of the It´s Live in Queensland campaign of events this year. He added that the Crocodile Trophy was a very unique event uniting racers from all over the world and that he was so happy that for almost a quarter of a century it showcased some of the most beautiful regions of Australia to the World and enables cyclists to share such amazing experiences with like-minded people.

“Sport, more than anything else, goes far beyond politics. It has the power to achieve global unity,” concluded Gerhard Schönbacher.

The Crocodile Trophy will start this Saturday, 13 October at 9:30am with a rider call-up from 9am at McKenzie Street Reserve in Cairns and finish on 20 October in Port Douglas. 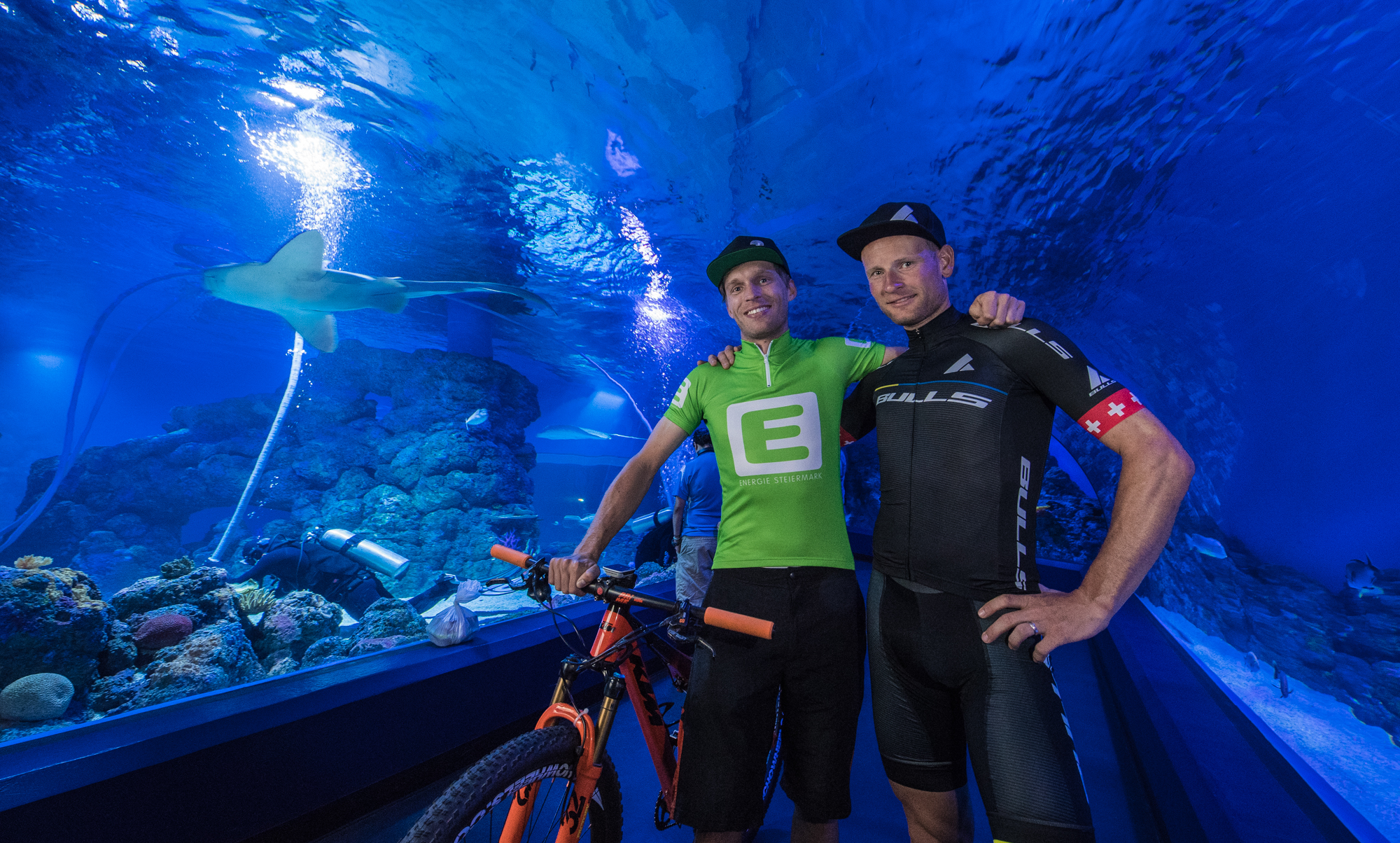 Matthias Grick trying on the green ‘Best Austrian Leader Jersey’ today and has ‘his eyes on the top step this year’. Today at the Cairns Aquarium alongside multiple winner Urs Huber (SUI). 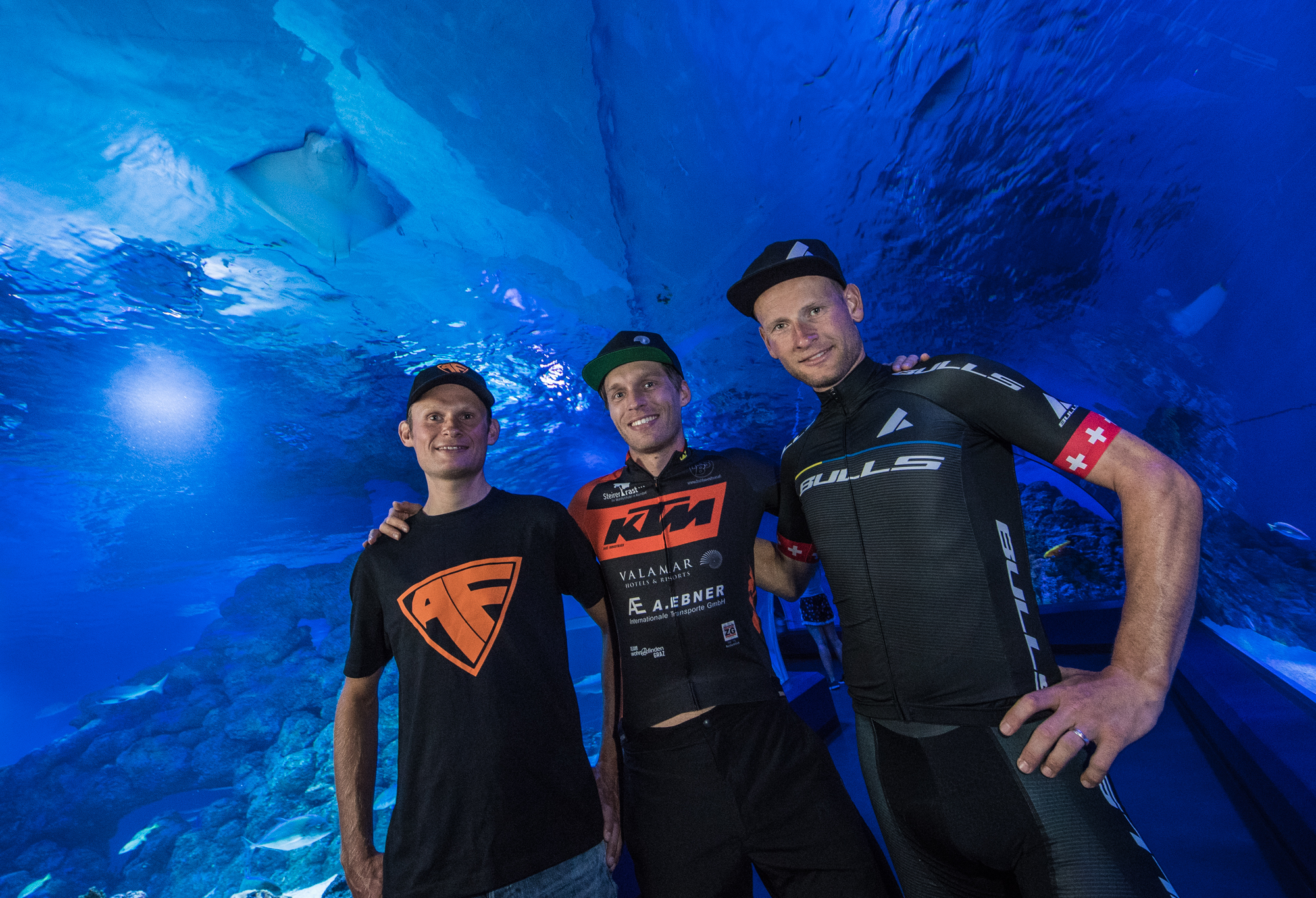 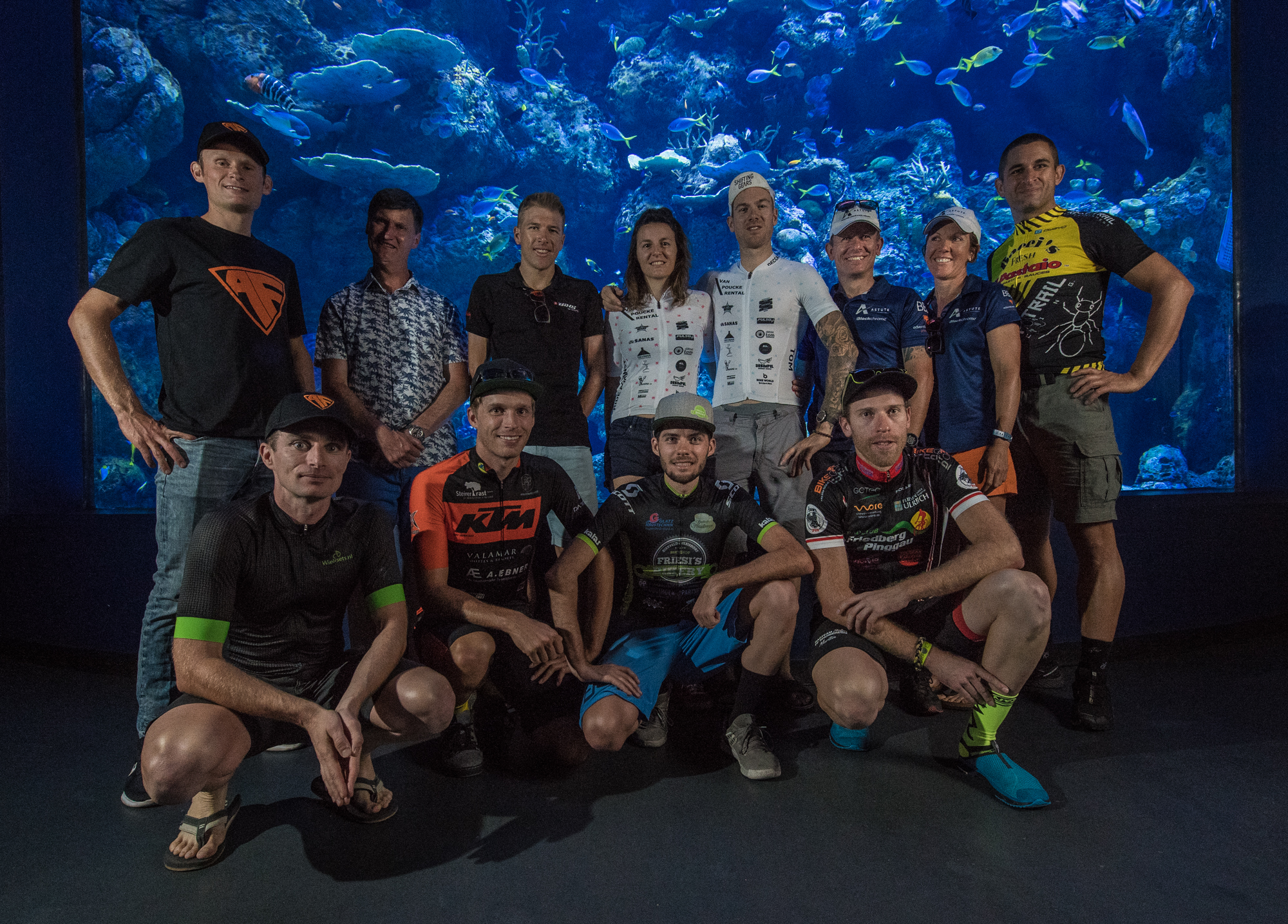 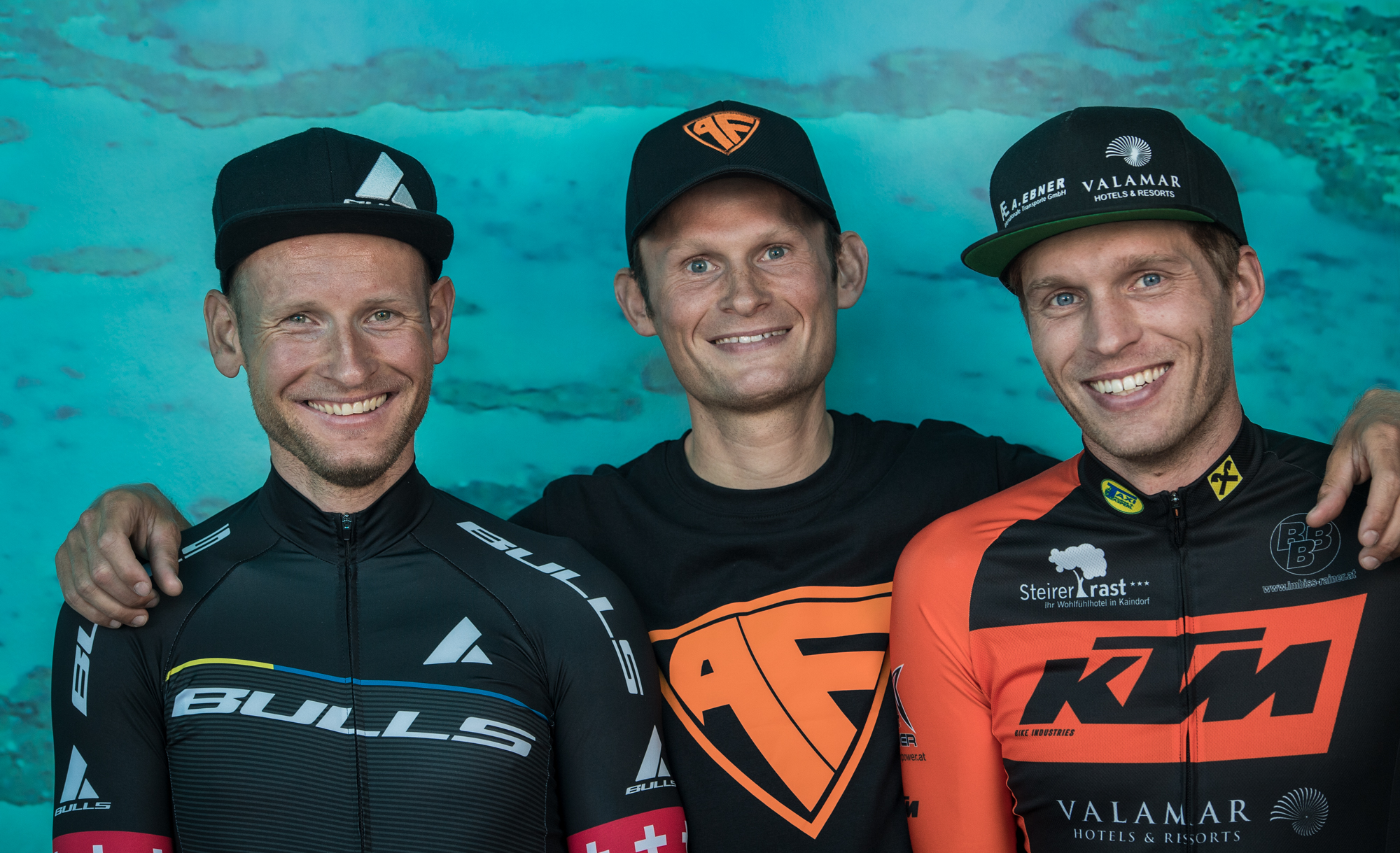 Enjoying the quiet time before the storm and socialising ahead of the race start: Soren Nissen (LUX), Matthias Grick (AUT) and Urs Huber (SUI) at the Cairns Aquarium today.