Today the second-last stage of the 25th Crocodile Trophy took the racers from Skybury Tropical Plantation to a brand new race destination at Hartley’s Crocodile Adventures. With a race time of 02h44:38,8, Bart Classens from the Netherlands takes his fourth stage win at this year’s event in a sprint finish against Spain’s Brandan Marquez Fernandez and the race leader Alan Gordon from South Africa. Australia’s marathon specialist Michael England came in sixth today (+2:39min) had said that today was going to be a decisive day for the overall victory. With the short individual time trial stage of 34km tomorrow until the finish line in Port Douglas it will be extremely tough to take the +8:28min gap off Gordon. With a three hour race time today, Angelika Tazreiter from Austria is set to finish this year’s Anniversary Crocodile Trophy as the fastest woman and with a top 15 position outright and well-deserved title.

Today’s stage finish was at Hartley’s Crocodile Adventures, which is the largest wildlife attraction in Northern Australia. For the first time this iconic attraction hosts a stage finish of the Crocodile Trophy with the camp set up in the heart of the park. Said stage designer and Operations Manager Brendon Skerke, “I specifically planned the route this year a way so that today we all can have a relaxing afternoon at the magnificent Hartley’s Crocodile Adventures park together. It will be a memorable arrival for riders and crew alike.”

Skerke is a local police officer who spent most of the last year scouting trails, liaising with local mountain bike groups and arranging permits with land owners and managers. He said that this year’s stage plan reflected his passion for this race and his enthusiasm to showcase the incredibly versatile terrains and scenery his home in Tropical North Queensland has to offer. “I designed climbing stages through the rainforest, dry, dusty, sandy and long outback stages, tight and technical single track stages. Some stages will have a blend of two of those elements or maybe even all three. This way this year’s Croc will have a little something for everybody and more importantly the likely category leaders will be the true allrounders”, he explained.

Fellow racers like Michael England, the Australian who will start as the second outright (+8:28min) in the field into tomorrow’s time trial have been already commenting about the versatile racing experience on so many different types of terrain and covering so many different landscapes. “You just never know what this event sends us on, we’ve kind of covered every single surface that I’ve ever ridden on in one tour”, England said of the last seven days of racing in Tropical North Queensland with the Crocodile Trophy.

The Crocodile Trophy started last Saturday in Cairns and almost 150 racers and crew from all over the World and Australia have been on the tour together – the peloton alone represents 20 different nationalities. On day one they climbed up to the Atherton Tablelands and for the first time the event will stopped at Ringer’s Rest Function Venue and Wondecla for two nights each. The race then moved to the Mareeba region with two nights at Skybury Tropical Plantation until this morning.

After spending the night at Hartley’s Crocodile Adventures Adventure with the crocs and many other native Australian animals, the final stage tomorrow is a short but challenging 34 km time trial. The racers will be released in reverse order of the general classification. The start is the climb up Quaid Road, a pinchy 4.6 km before re-entering the thick rainforest and the beautiful single trails of the Twin Bridges track. The final stretch is raced on the infamous ‘Bump Track’ where the riders will descend over 400 vm in just 1 km before stopping the clock for the 8th stage of the 25th edition on the bottom of the escarpment (winners arrival est. 10:30-10:45am).

The grand finale will be a ride together along the magnificent Four Mile Beach with the mass arrival of the Crocodile Trophy finishers of 2019 expected between 11:30am and 12pm. The official winners ceremony will take place near the Port Douglas Surf Life Saving Club at Four Mile Beach from 2-3pm. 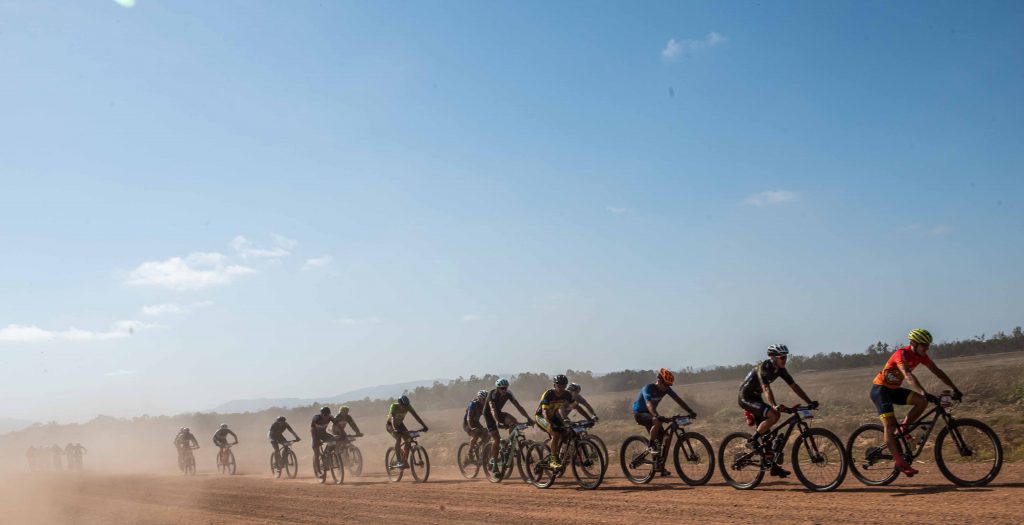 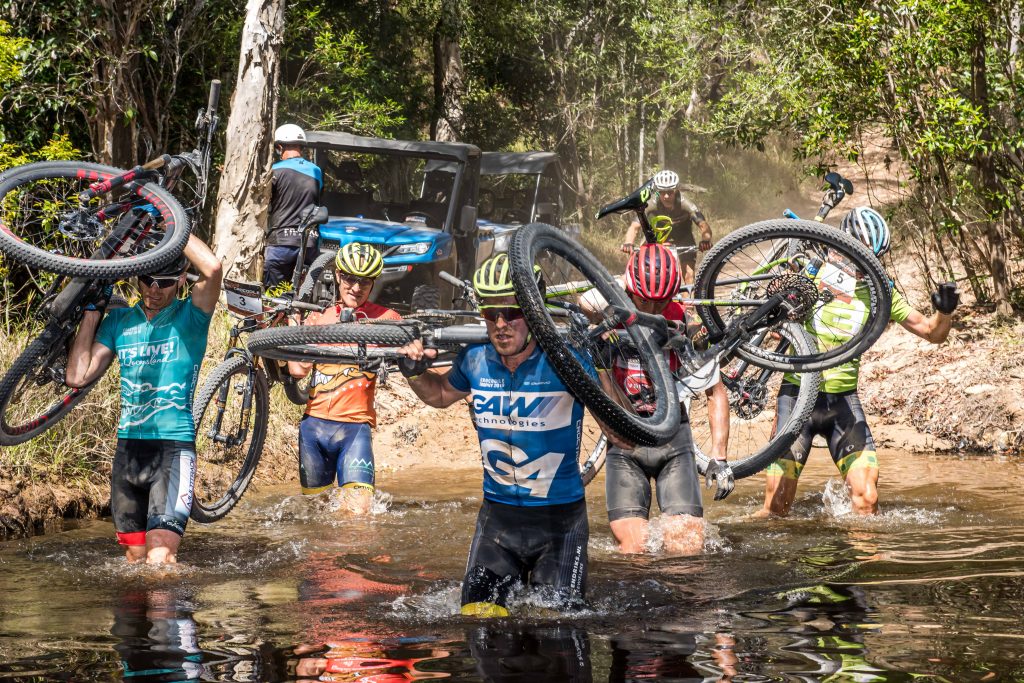 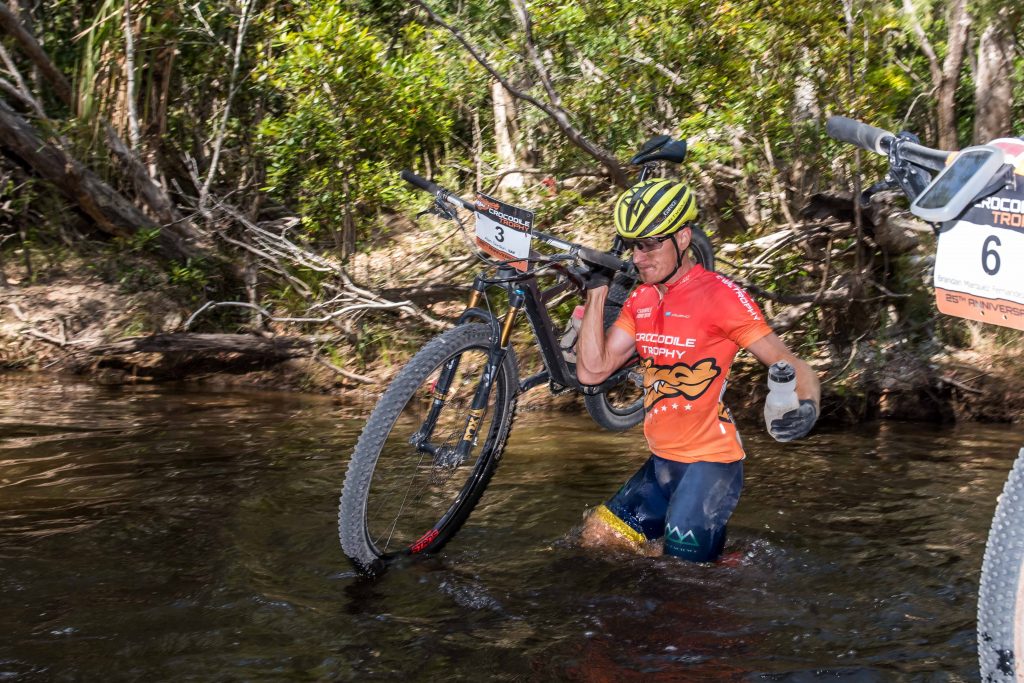 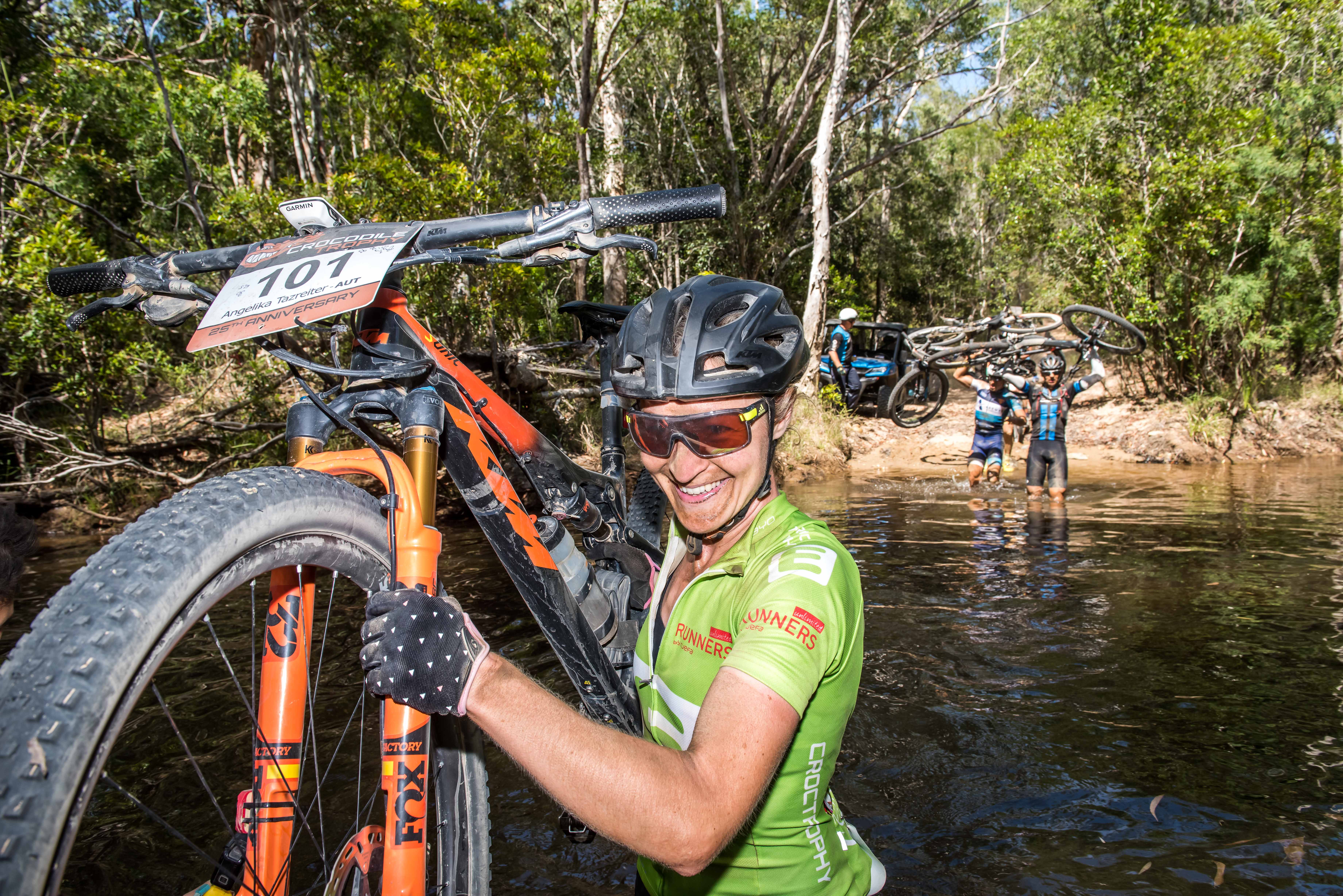 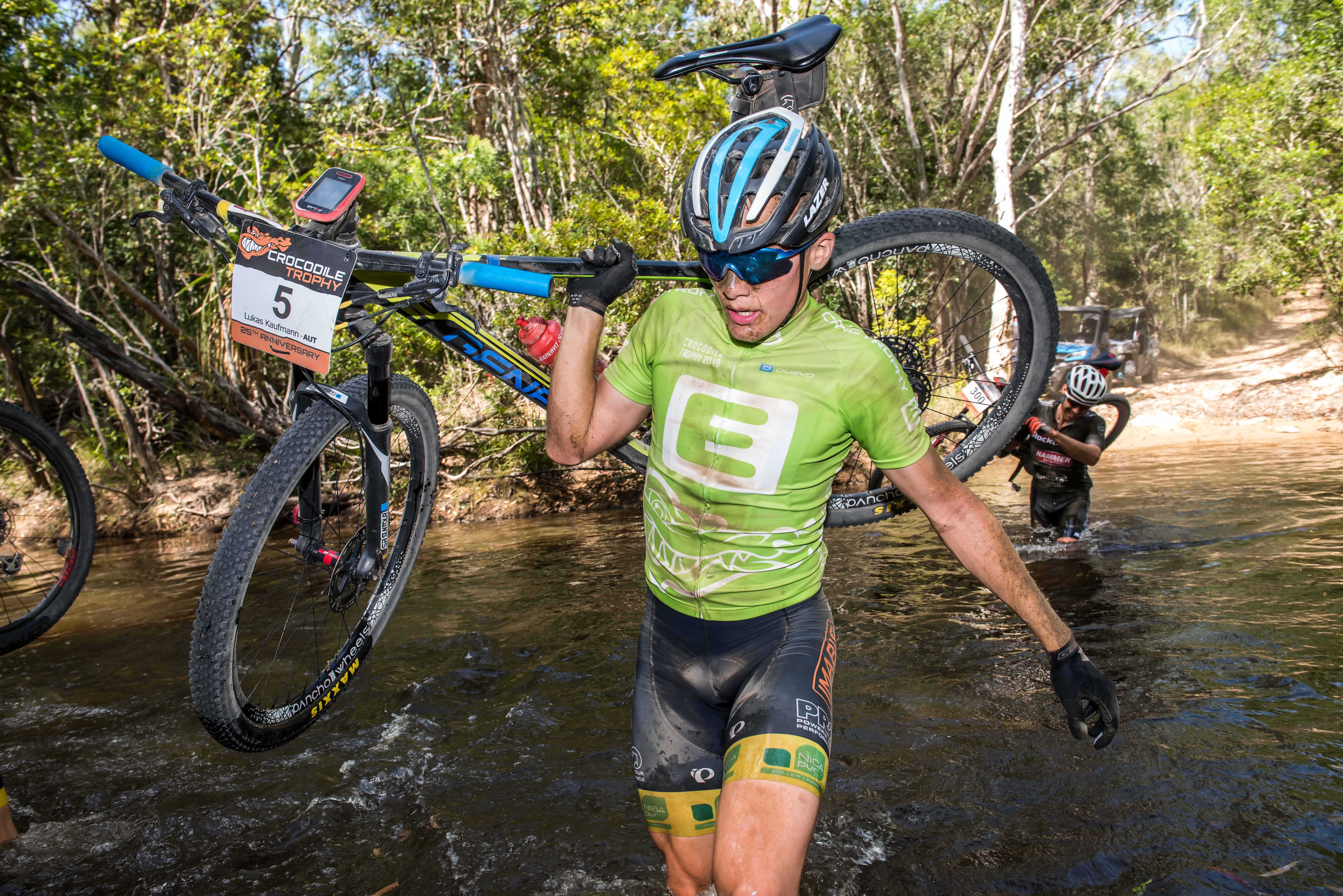 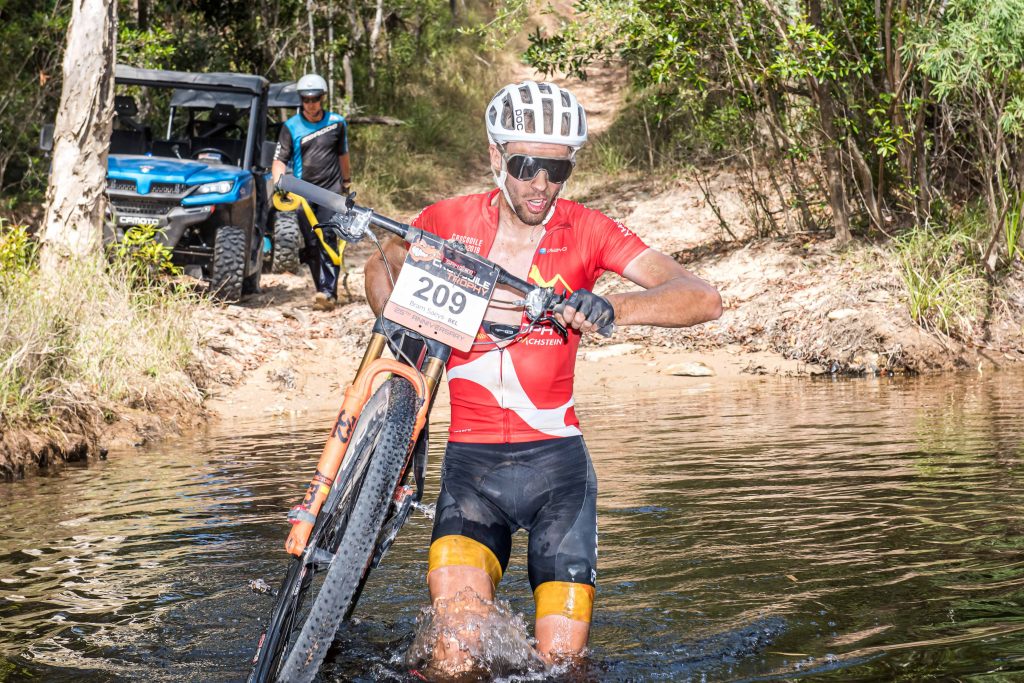 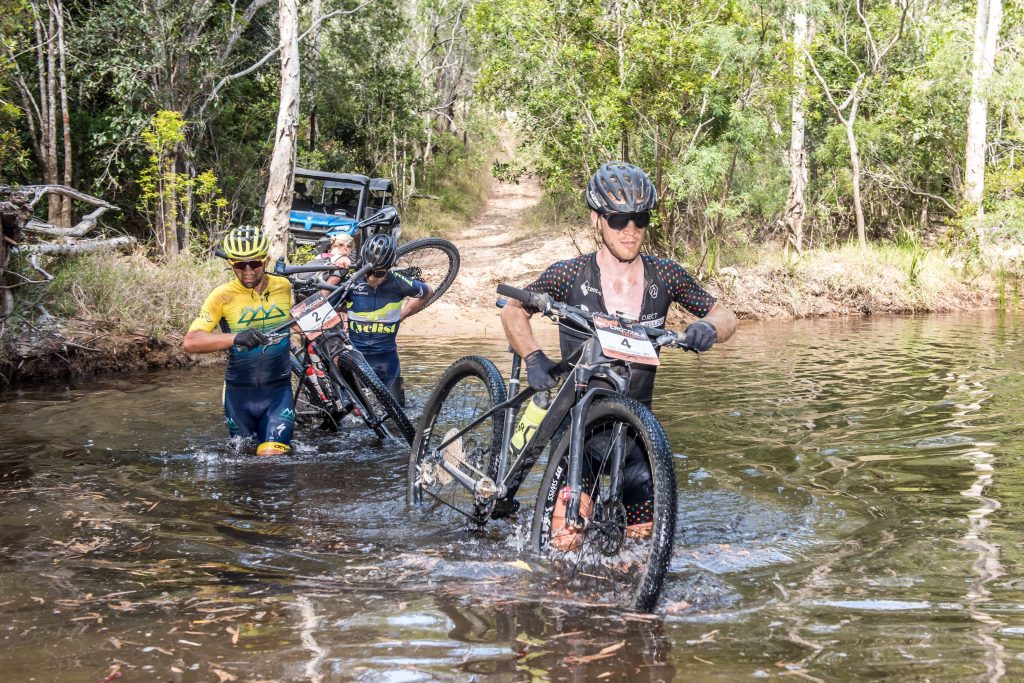 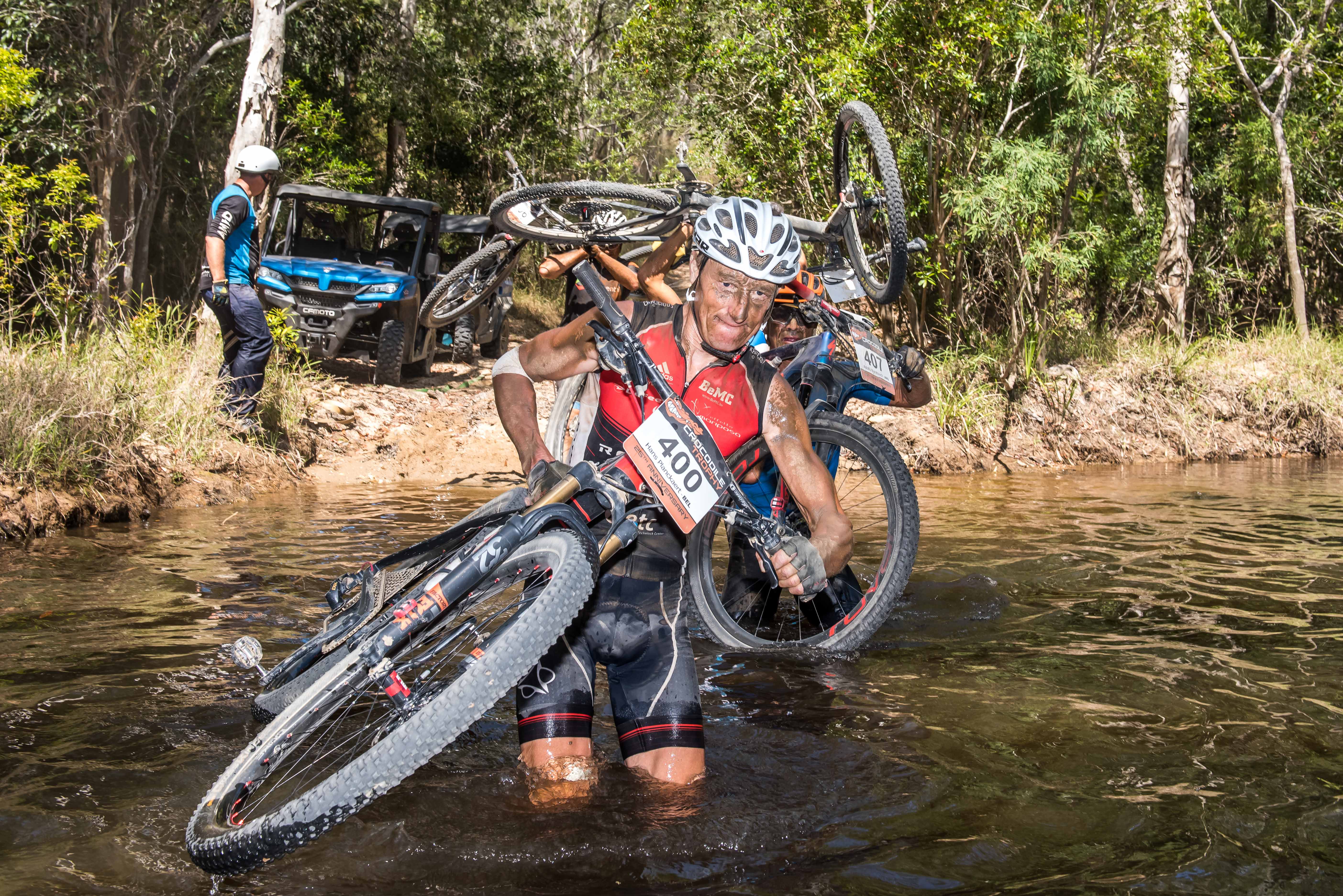