The Danish elite rider Sören Nissen who races for Luxemburg wins today’s stage in a furious sprint towards the line, winning just ahead of the Czech rider Milan Damek. Urs Huber and Konny Looser crossed the line right behind in third and fourth. Yesterday’s stage winner Matthias Grick was in fifth with a gap of about 16 minutes. Sjoukje Dufoer repeats women’s win ahead of Sarah White and Lucy Coldwell. With two stages still to go, the overall standings in elite men and women remain unchanged.

The Crocodile Trophy racers and crew have been relaxing at Skybury Coffee Plantation and enjoyed the freshly-brewed coffee with delicious cakes from the Cafe yesterday afternoon and more coffee with fresh fruit from the orchard for breakfast.

It seems the elite breakaway group of four with Huber, Looser, Nissen and Damek were full of Skybury-energy as they charged towards the finish on today’s day six of the Crocodile Trophy. They had managed to break away on today’s 127 km stage that took them across remote Outback roads and through Mount Mulligan Lodge.

In a spectacular and tight finish spring, Soren Nissen took the stage win ahead of the Czech rider Milan Damek. Urs Huber and Konny Looser followed straight after with Huber one stage closer to a possible fifth Crocodile Trophy win. Overall, he has a lead by 1:10 minutes ahead of fellow Swiss racer Looser and has a defensive racing strategy to the finish line in Port Douglas he said yesterday, “I now have to make sure bike and body perform well and keep a very close eye on Konny.”

Stage winner Nissen is 47 minutes behind the Swiss duo in the general classification in third with Matthias Grick (+01:40:29) in fourth and Damek in fifth (+02:15:56). For these riders the event had turned into a very tactical race and the battle for stage wins – and the boomerang trophies that come with those – is now in full swing.

Crocodile Trophy founder Gerhard Schönbacher said today that it was that racing spirit that he so enjoyed being a part of. After 24 years in the lead and track marking car he was able to finally do what he loved, chatting to ´his´ racers and crew and immersing himself in the event, “If I had known what a relief it would be to hand over the responsibility to a General Manager team, I think I would have done it years ago. I see my race from a completely new perspective and I´m having a great time!” He added that he was ´on call´ and available for the new management team with Regina Stanger and Koenraad Vanschoren at the helm of the Crocodile Trophy, but that he wasn´t “getting involved” in the day to day operations. “It is such a joy for me when riders come up to me for a chat”, he said clearly comfortable in his role and that he was looking forward to next year’s 25th Anniversary Edition.

In the women’s Sjoukje Dufoer claims her second stage win on the relatively flat race track, which had been favourable for the experienced road racer. Sarah White defends her overall lead, finishing in second with a gap of seven minutes today. Lucy Coldwell is in third and has a gap of 14:36 min in the general women’s classification behind the local contender and 2015 Croc winner Sarah White from Cairns. Sjoukje Dufoer is in third overall by more than four hours. She said that the first three stages had been very challenging with the steep climbs and difficult and rough terrain, but that she enjoyed the racing experience and the event atmosphere. She added that she was very happy to take a second Boomerang for today’s stage win home as a souvenir from her adventurous honeymoon.

The Crocodile Trophy has been endorsed by the International Cycling Federation (UCI) for the past years and the 2018 edition has the S2 status, which comes with the chance to collect prize money and international ranking points for the elite riders. As such the event organisation includes a commissaires team of Australian officials under the direction of Chief Commissaire Jeremy Christmas from New Zealand. He said that at the elite end the Crocodile Trophy was very hard and very competitive, compared to other events he had officiated before, however, that the amateurs really embraced the challenge, “I think at the ‘fun end’ people are really enjoying the variety of the stages, but it’s incredibly challenging. Some have found it difficult in the beginning but everyone is getting their legs, and hopefully they will be enjoying the remaining stages. There seem to be a lot of smiles around the place! Which is kind of strange, seeing how they have really hammered their bodies over the last couple of days.”

He explained that his team were making sure that all race participants were safe, that the race track was marked adequately and that the feed zones were operating smoothly. “It is always difficult on a track that is 650-700km, to make sure that everything is marked correctly. Most importantly we make sure that everybody is safe and we are also keeping an eye on the elites in particular and the racing behaviour, which so far has been excellent.”

Tomorrow’s second last stage will move the peloton on to Wetherby Station, an historic outback cattle station. The marathon stage will be 102 km and 1350 meters of elevation. The Four Mile Beach arrival in Port Douglas is expected from 1pm with the official winners’ celebrations at 2pm near the Surf Life Saving Club. 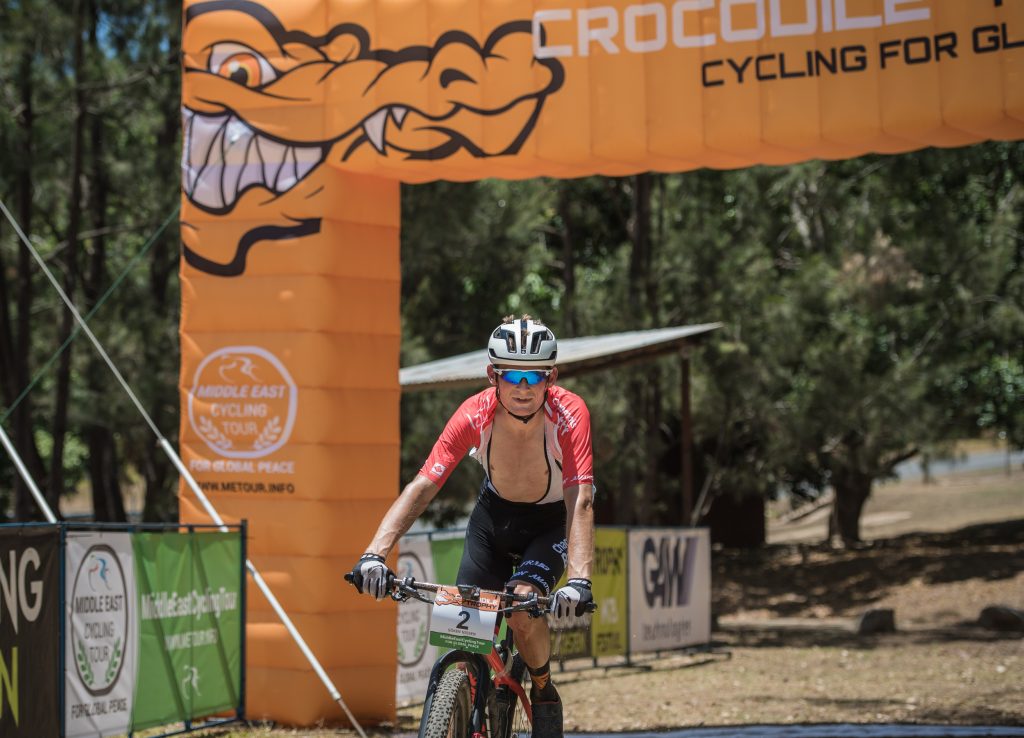 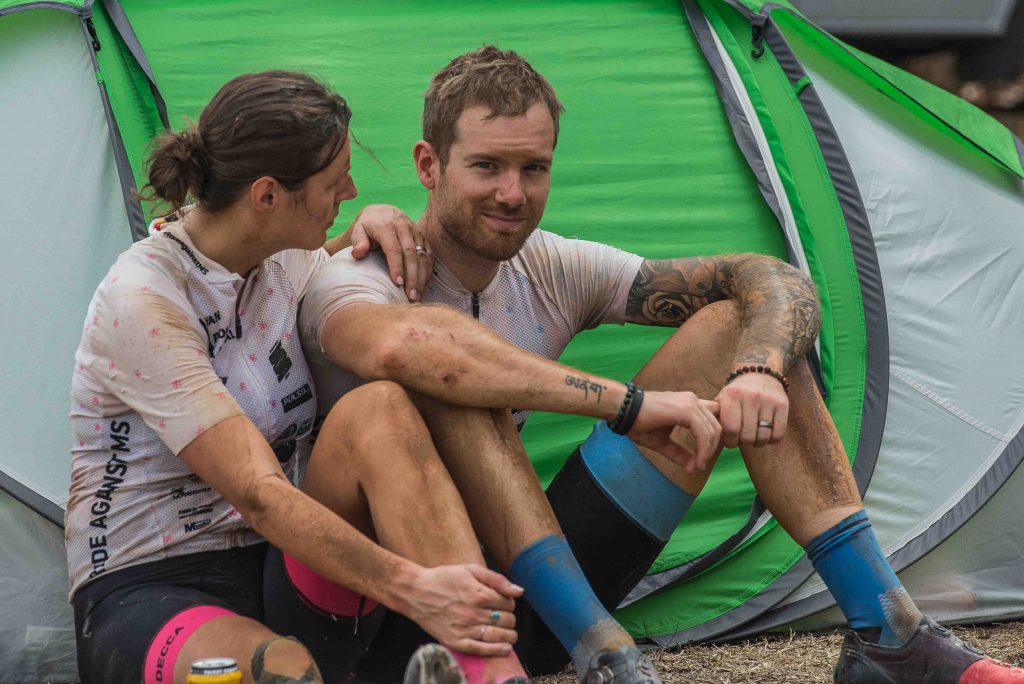 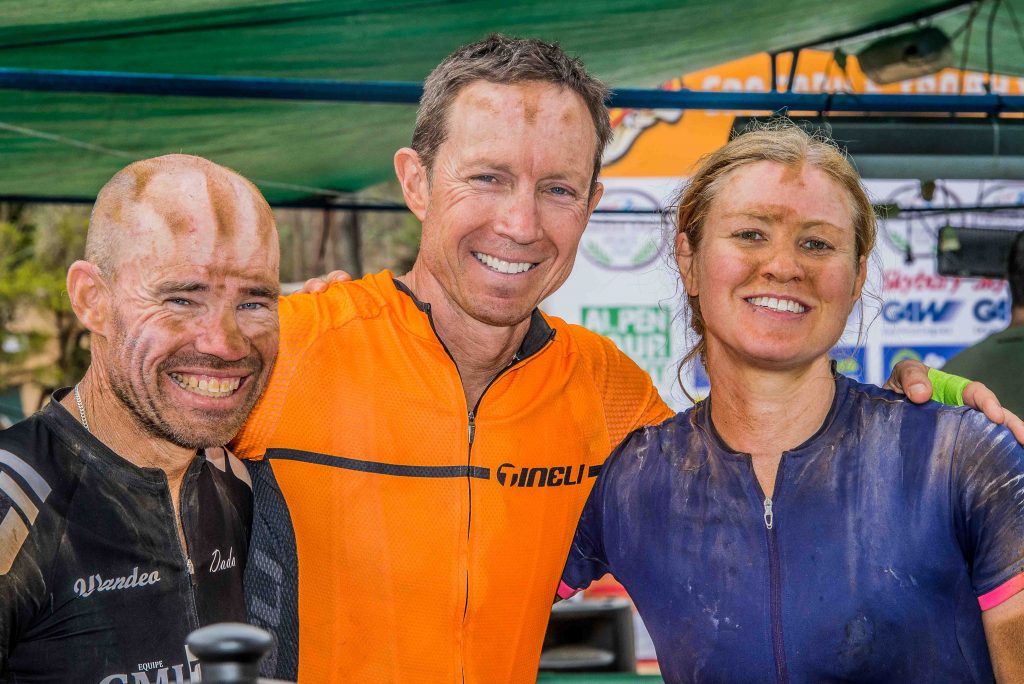 Faces of the Croc. 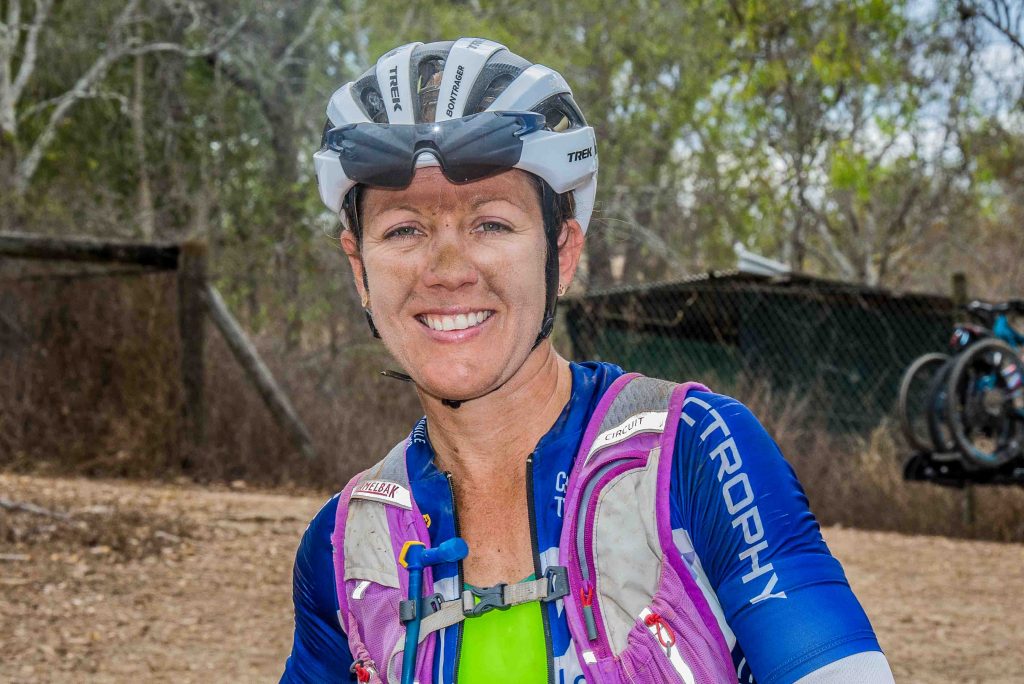 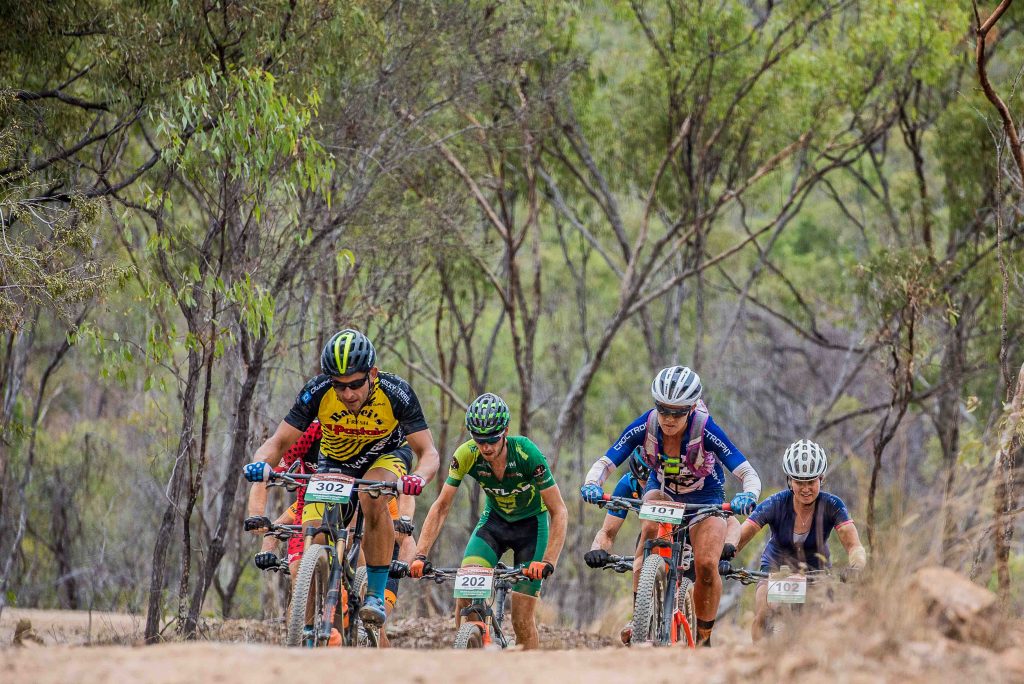 A hot day in the saddle – Sarah White (right) among fellow Aussie racers. 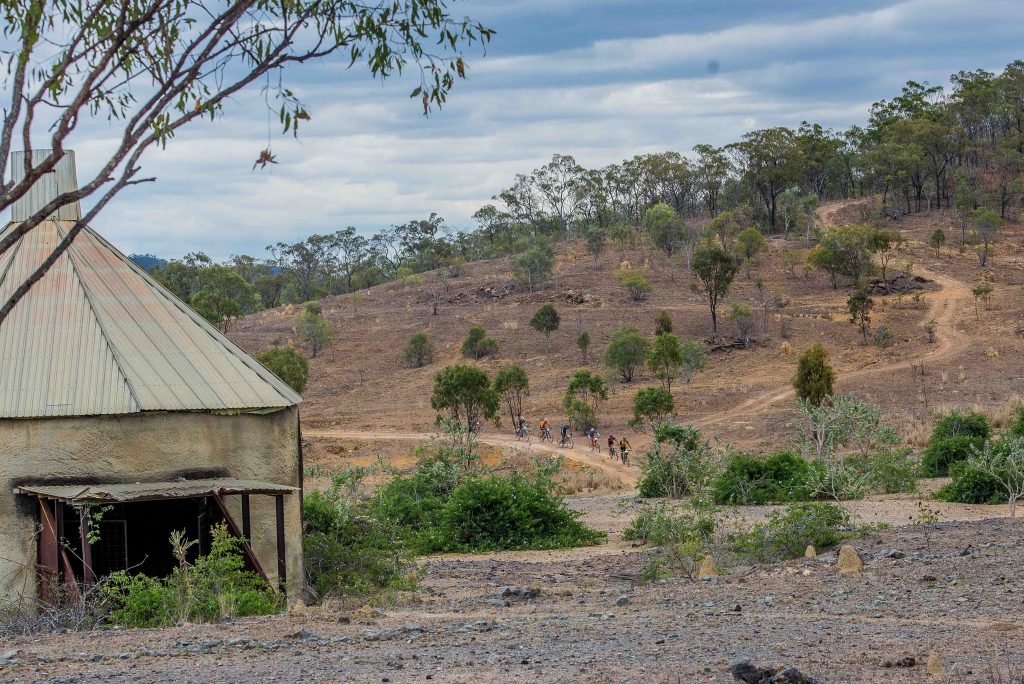 Outback racing via Stannary Hill mine. 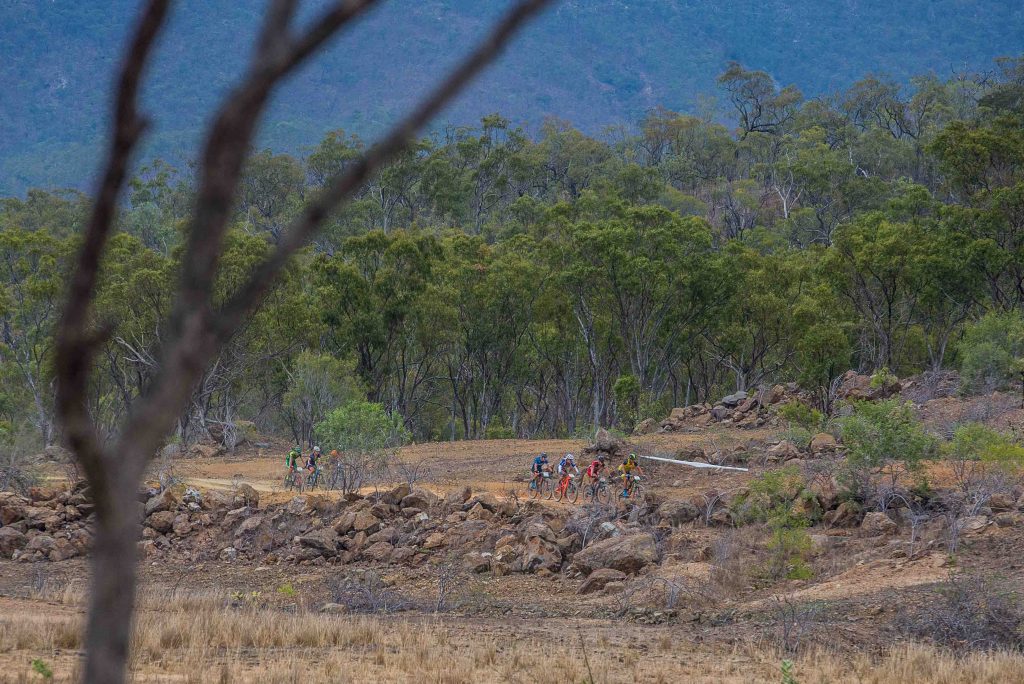 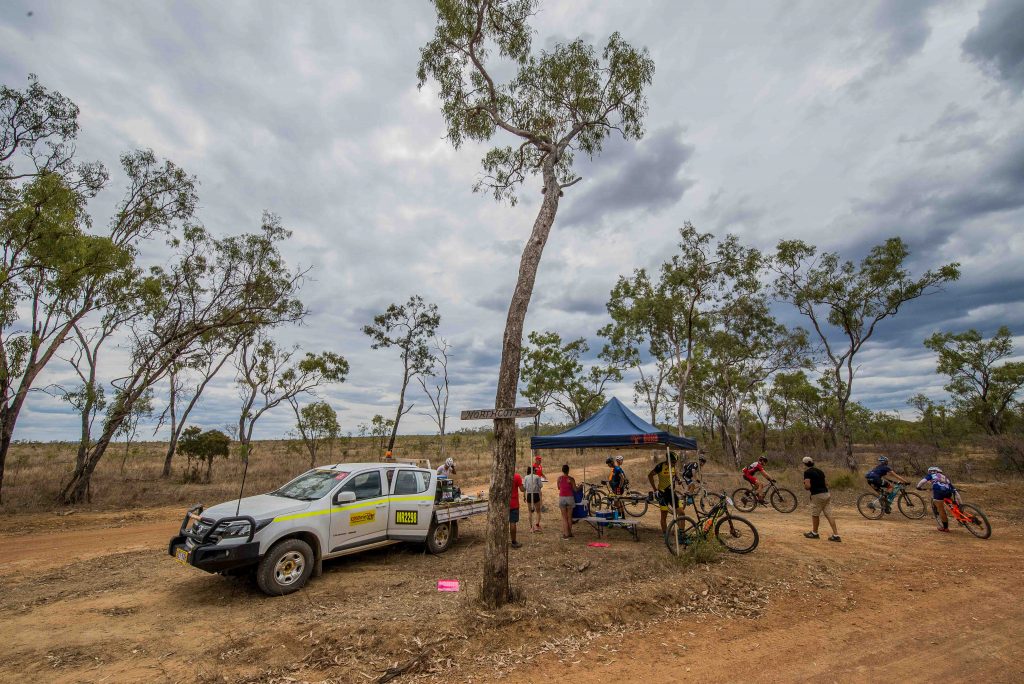 Feedzones are set up every 30 km, riders can replenish food and water. 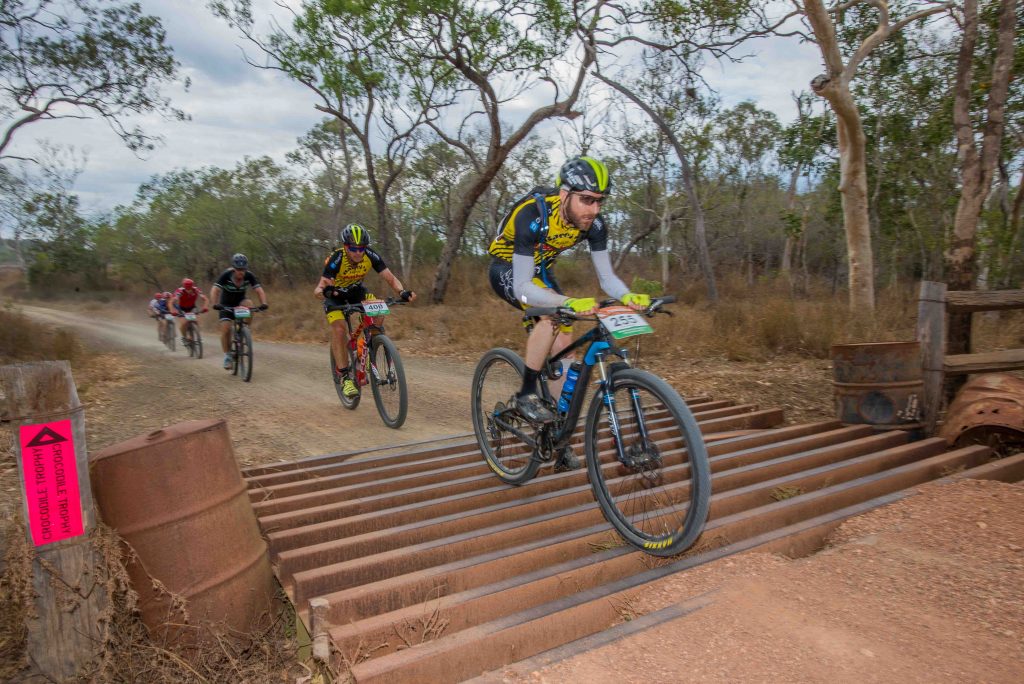 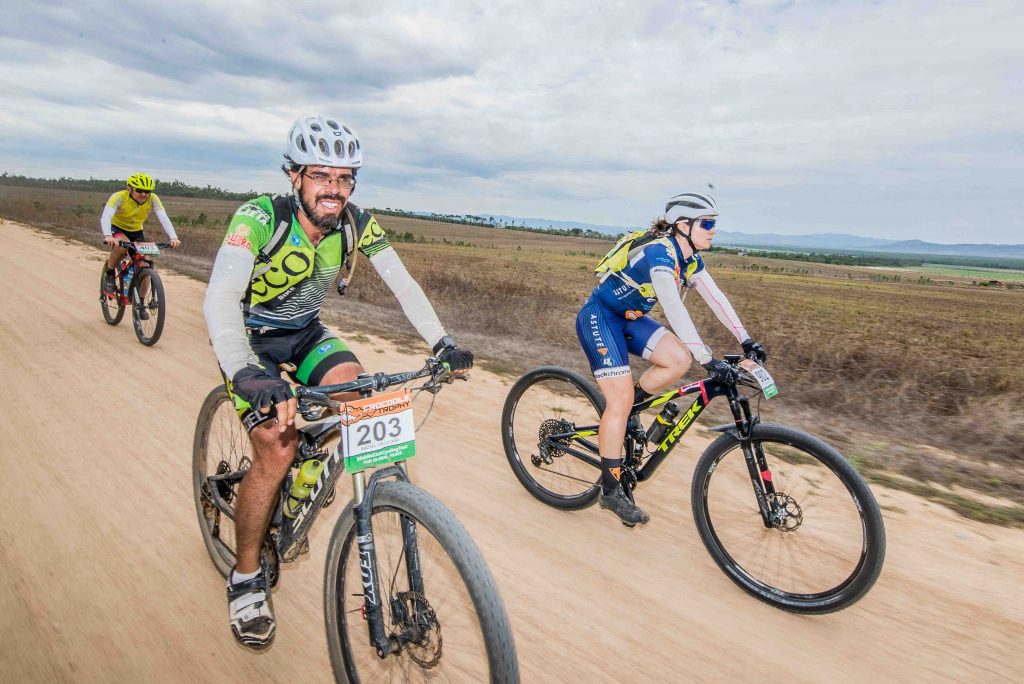 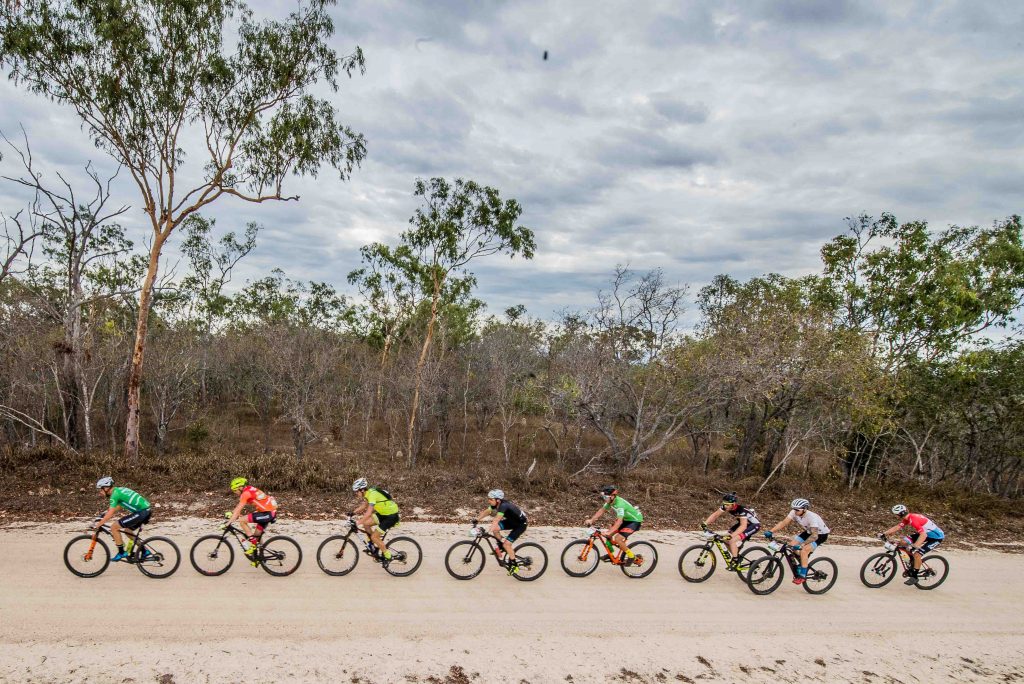